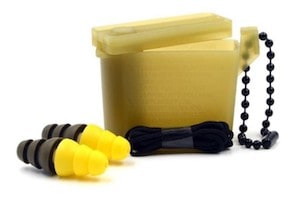 Current or former military personnel, who are suffering from hearing loss caused by wearing defective earplugs manufactured by 3M Company, may have claims for compensation against 3M. Suthers & Harper is investigating and filing lawsuits against 3M on behalf of U.S. soldiers and veterans.

During the 1990s, Suthers & Harper represented more than 400 locomotive engineers and trainmen, who were suffering from noise-induced hearing loss as a result of their work on the railroad. John Suthers, the firm’s founder and senior partner, filed lawsuits against two of the largest railroad companies in the United States, and obtained compensation for his clients’ permanent loss of hearing. This Savannah 3M earplugs lawyer is now utilizing his expertise on noise-induced hearing loss cases to help U.S. soldiers and veterans, who have suffered permanent hearing loss because of defective earplugs sold by 3M Company to the U.S. government. 3M’s defective earplugs were known as the Dual-Ended Combat Arms Earplugs (version 2).

Noise-induced hearing loss is almost completely preventable with properly designed and properly fitting hearing protection devices. The 3M earplugs were not long enough to be inserted properly into a soldier’s ears. The defective design prevented a snug fit in the ear canal, causing the earplugs to become loose and exposing the user to dangerously high noise levels from weapons and artillery fire. This resulted in thousands of soldiers and veterans suffering from noise-induced hearing loss. These soldiers and veterans deserve a 3M earplugs attorney in Savannah to assist then in obtaining compensation for their losses.

Even a relatively mild degree of hearing loss can have a great impact on a person’s quality of life. Most people with noise-induced hearing loss will lose hearing in the high frequencies first. This makes it difficult for them to be able to distinguish consonants when spoken, such as B, C, F, S, T, and Z. A person with high frequency hearing loss often has to strain to understand what is being said, and finds it more difficult to hear in crowds or other places where there is any background noise. They hear vowels when spoken, but have a difficult time distinguishing between consonants. For example, a speaker could say a simple word such as ball, call, fall, or tall, and the person with high frequency hearing loss will often hear only “all,” because he or she cannot distinguish the consonants. This can make everyday activities, such as talking to your spouse, going to church, going to a movie, or going to dinner with friends, stressful. Your Savannah 3M earplugs lawyer understands the stress and agony caused by losing your ability to hear clearly.

The defective earplugs were manufactured originally by Aearo Technologies, a company that 3M acquired in 2008. The Dual-Ended Combat Arms Earplugs were sold to the military from 2003-2015. It is estimated that more than 1 million soldiers were issued 3M’s earplugs while engaging in various combat missions, such as the wars in Iraq, Afghanistan, Pakistan, Libya, and Syria.

The U.S. government has contended that Aearo Technologies was aware of the defect in the earplugs as early as year 2000, when it began testing the effectiveness of the earplugs. Earplugs like these are sold with a Noise Reduction Rating (NRR), which is a measurement used to determine the effectiveness of hearing protection devices. The higher the NRR number, the greater the potential for noise reduction. The government alleged that 3M and Aearo Technologies manipulated the results of the tests of their earplugs’ effectiveness in order to meet the government’s standards. As a result of the companies’ fraudulent activities, U.S. soldiers and veterans who used 3M’s earplugs, thinking the earplugs would protect their hearing, are now suffering from permanent loss of hearing instead.

If you or someone you know served in the military between 2003-2015, were issued 3M’s earplugs during service, and are suffering from hearing loss, contact a 3M earplugs attorney in Savannah to discuss your rights. These cases are handled on a contingency fee basis, meaning that there is no attorney fee unless a recovery is obtained. Claims of this type must be filed within a certain time period or the claim will be barred by law, so you should not delay in contacting an attorney who has experience handling these types of cases. For a free consultation about your potential hearing loss claim against 3M, call Suthers & Harper toll free at 1-800-320-2384, or complete our Contact form.

Contact Us
Practice Areas
Client Reviews
★★★★★
“Losing my dad was the hardest thing I've ever had to deal with in my life, especially the way I lost him, but I called Adam and Suthers and they made everything I was going through a little easier. I want to thank them from the bottom of my heart.” D.F.
★★★★★
“Top Professionals...highly credentialed legal firm...they will get you the compensation that you need and deserve...” G.M.
★★★★★
“Mr. Suthers was a Southern gentleman of highest quality. He was kind and thoughtful when I needed it most.” Anonymous
View More
Send Us Your Review Review Us Online